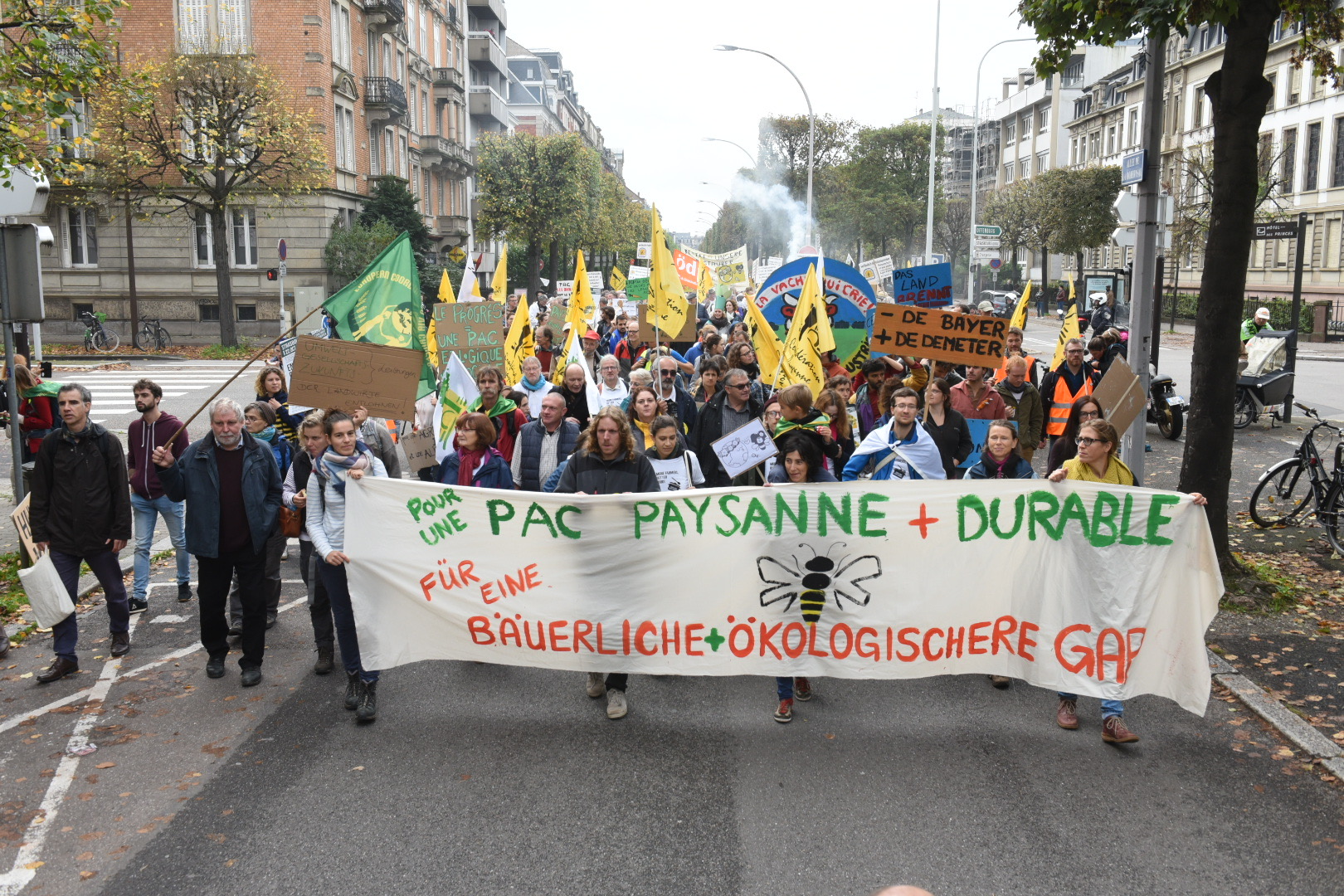 Yesterday morning, several hundred protesters descended on Strasbourg to call on the European Parliament to reform the CAP with acknowledgement of the serious climate and environmental crises. A cross-border collaboration between Wir haben es satt! and Pour une autre PAC, the rally was the final action of over 90 which made up this year’s Good Food Good Farming campaign.

🚜🌻🐝Farmers, bee-keepers, activists, NGOs, consumers, young & old from urban and rural areas across Europe join forces for the #GoodFoodGoodFarming action days. Today we carry their demands for a better #FutureOfCAP to the @EuroParl_EN in #Strasbourg. https://t.co/ut2LfLyAKA pic.twitter.com/dCYttLK4AK

“We have joined our colleagues and fellow activists in France today in calling for agriculture policies that support small and medium-sized farms in the transition to sustainable farming. We are concerned about the climate, our future and our livelihoods,” said Wolfang Hees, farmer and representative of the German small-scale farmers association of the region of Baden-Württemberg. “We will continue to change farming, but we need financial and the public’s support in producing good food in ways that protect the climate, animals and the environment. It is high time governments divest from agro-industries and redirect public subsidies to end the loss of small-scale community-based farming.”

A key demand in the Good Food Good Farming campaign is that the push towards a far, green and healthy CAP must involve helping farmers transition to more sustainable agricultural practices. As such farmers themselves played a big part in the demonstration, fronting the rally with four tractors alongside supportive consumers and activists.

Food, music and talks on biodiversity collapse, soil degradation and the plight of small farms and rural livelihoods characterized the day and the rally concluded in front of the Parliament. Here representatives of the coalition handed Members of the Parliament an open letter, signed by 23 organisations plus thousands of postcards with demands for a future European food system.

The letter references the latest IPBES and IPCC reports  which make for bleak reading and push for urgent, ambitious action to halt total climate breakdown and further collapse of biodiversity. It argues that the current CAP fails on many fronts, even in the Commission’s own assessments – it “is unable to secure fair revenues and generation renewal, it fails to protect diverse, small-scale farms from bankruptcy, land grabbing, speculation and urbanisation. It fails animal welfare and biodiversity. It escalates unsustainable trade between the EU and other countries, notably of the Global South. And ultimately, it threatens food sovereignty.” 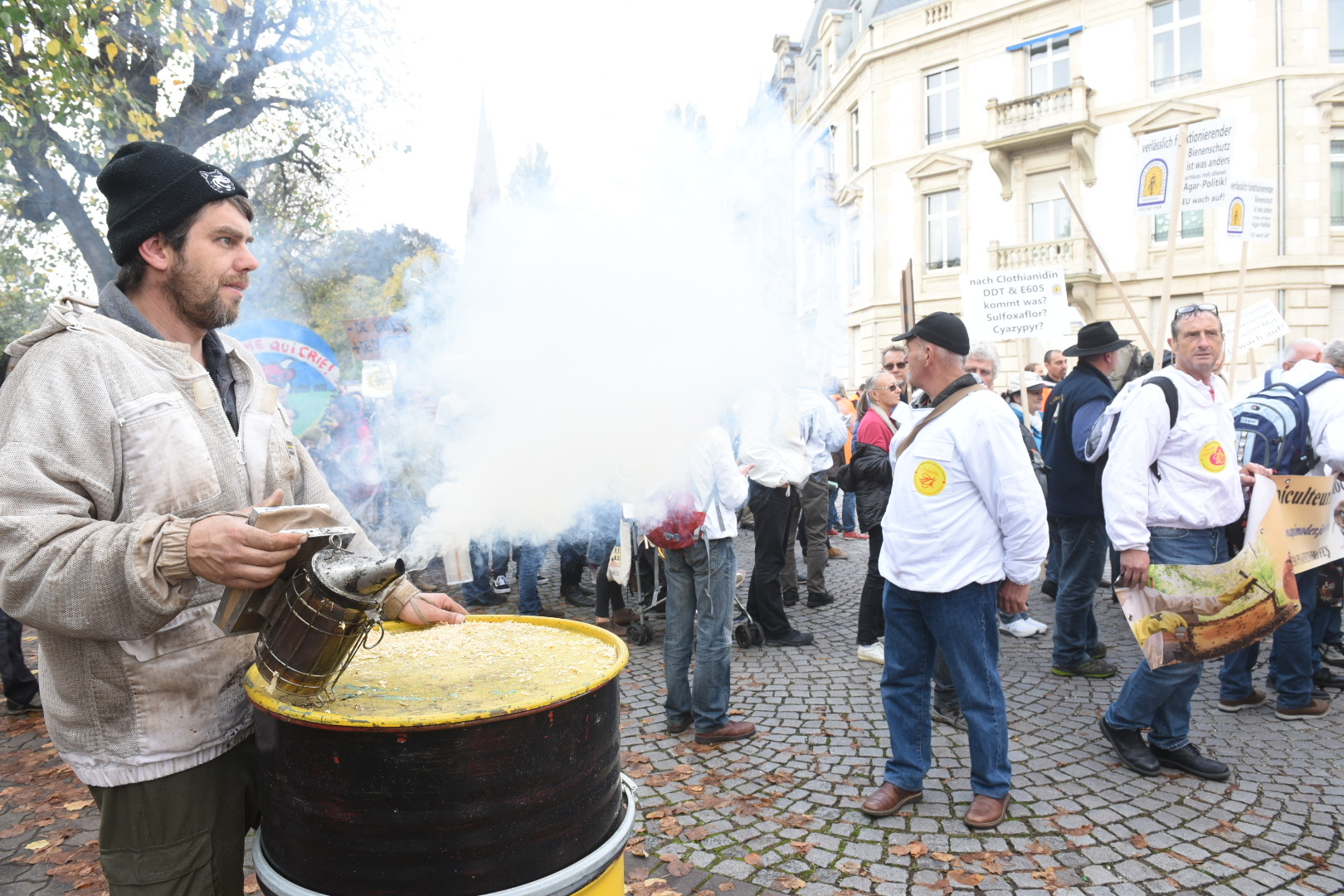 It goes on to argue that the Future CAP must respond to the profound social, economic and ecological challenges our food system faces. Signatories ask Members of Parliament to use their mandate to accelerate and finance an agricultural transition to:

The letter is signed by the following NGOs. 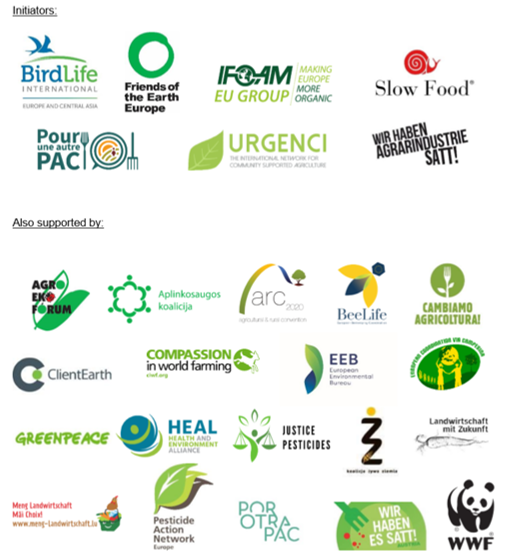 “The upcoming months are vital as the CAP reform enters the final phase. It will play a major role in determining Europe’s food and farming future,” said Rachele Lodi, Slow Food’s International Councilor for Europe. “The new Parliament, Commission, and Member States must act now before it is too late.”

✉️ We hand over postcards & open letter demanding #GoodFoodGoodFarming to the @EuroParl_EN in Strasbourg! Decision makers can no longer ignore society’s call for a fair, green and healthy #futureofCAP @schirdewan https://t.co/PAN6fL1GqU pic.twitter.com/gyErRtaNJv

This action is a culmination of a busy October for the Good Food Good Farming campaign which saw  around 300 groups organise over 90 events in 23 countries. Picnics, farm visits, demonstrations and conferences were a way of gathering European citizen’s demands and ideas for a future food and farming system for Europe. The campaign was initiated in early 2018 and last year saw 69 events in 19 countries. It is encouraging to see the movement already deepen and grow.

Good Food Good Farming Campaign is cooking up a storm