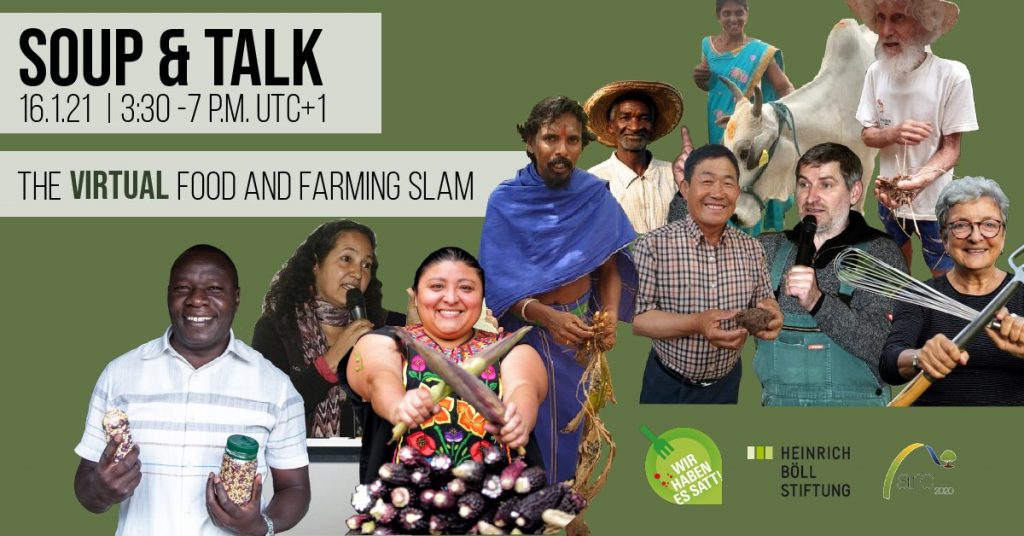 Would you like to hear the story of an urban gardener in Syria? Or about the most famous hectare in France, growing hope in a back garden in Venezuela or peatland activists in Northern Germany? Action for fair and agroecological food system transformation takes countless forms – Soup & Talk brings together a global mix of innovative initiatives ready to share their grassroots efforts with the world. The Soup & Talk good food and good farming slam is happening via Zoom this Saturday, January 16th from 15:30 to 19:00 CET, and registration is free.

Since 2011, Soup & Talk takes place after the Wir Haben Es Satt demonstration (We Are Fed Up!) as part of the good farming movement’s response to Berlin’s so-called Green Week – aka the annual agri-industrial meeting in the German capital.

The think-in on food and farming issues, which is usually held in the large main room and halls of the Heinrich Böll building in Berlin, is going online this year. This means that speakers and spectators from all over the world are invited to be part of this unique gathering.

In short and snappy visual presentations, practitioners from more than 30 initiatives will share how they are contributing to fair and ecological food and farming system transformation.

Speakers hail from over 14 countries, from Uganda to Syria, Columbia to the USA, the UK to France and beyond. The event will be available through live interpretation in German and English, and breakout rooms will facilitate international grassroots networking.

At Soup & Talk, the presentation topics are wide and varied, but united around the common theme of building better food and farming systems. The event provides a forum for idea exchange on the innovative ways practitioners are overcoming the systemic shortcomings of the dominant approaches to food production, distribution and consumption.

Here, to whet the appetite, we introduce some of the presentations we in ARC are involved in, as well as one from our friends in the global digital community of people-owned food distribution. See you on Saturday!

The Common Agricultural Policy (CAP) accounts for one third of the EU’s total budget with 80% of that money going to only 20% of recipients. As well as fostering inequality, the CAP drives harmful farming practices which are playing a critical role in the ecological crises that face us in 2021.

Matteo Metta, CAP expert and policy analyst with ARC2020 will be presenting the work he has undertaken with the Good Food Good Farming movement and national coalitions from around Europe on an analysis of CAP Strategic Plans. Matteo will highlight reforming scenarios, including the #WithdrawTheCAP campaign and alternative options. He will also share his knowledge on the CAP Strategic Plans  –  what they are and what folks can do to make them fit for purpose.

Louise Kelleher will present a sneak preview of a brand new project that ARC is coordinating on the ground in France. It’s called “Nos campagnes en résilience”, and it is a project to support a fair, socio-ecological transition and to foster rural resilience.

Louise will highlight examples of concrete initiatives that are happening at local level in France. These initiatives take exciting new approaches to local food production, distribution and cuisine. At present they are isolated initiatives; the project seeks to help them connect, to spread the word about their work, to share their experiences, and to join forces to build a rural future – together. Alone, we go faster; together, we go farther.

Seeds4All and Catcher in the Rye

Blanche Magarinos Rey und Adèle Pautrat will present Seeds4All, an online platform which gives visibility to EU organisations involved in the collection, enrichment, production, dissemination and sustainable use of traditional and new varieties of seeds belonging to the public domain, freely reproducible and not genetically modified. Since it was launched in October 2020, Seeds4All already features 30 organisations and 23,976 seed varieties.

The background to this project is the new EU Organic Regulation which will come into force in 2022. This regulation will make it possible for heterogeneous seeds to be marketed in the EU without meeting the requirements of the conventional EU seed catalogue. Such a development will promote biodiversity in farming and gardening, and farmers will be free to save and reuse the seeds. This in turn can form a basis for breeding that makes seeds fit for challenges stemming from biodiversity loss and climate change.

Following on from the Seeds4All presentation, ARC2020 president Hannes Lorenzen will show us how these principles can be put into practice. Hannes will share the story of how he met the breeder Anders Borgen at a conference in Denmark in 2019; how through Anders he acquired evolutionary rye in Sweden; and how he grew this rye with a young farmer from his home island of Pellworm to develop his own seed for organic farming.

The Open Food Network has developed open source software that simplifies the process of establishing innovative, independent, community-led food enterprises. Food system transformation is enabled through this IT infrastructure which is used to facilitate ethical supply chains.

The digital distribution system is now deployed in 20 countries, sparking short food supply chains worldwide. Technological sovereignty is central to the model, which along with being open source, is based on transparency and held as a Commons. At Soup & Talk, Nick Weir, Communications Manager with the Open Food Network, will show how the system works for farmers, growers, producers, shoppers and buyers, and how it is being used to build food sovereignty in different countries around the world.

And there are many other wonderful food and farming initiatives ready to share their stories with you on Saturday – you will hear about the Millions of Protesting Farmers in India; an Indonesian Fungi for the Youth initiative, Regenerative farmers from Kiss the Ground in the USA; protesters who are blockading Tönnies slaughterhouses, and much, much more!

Register now and check out the programme (with more exciting announcements still to come!) over at the Soup & Talk page on the Wir Haben Es Satt website.

More on the initiatives mentioned

Catcher in the Rye: Breeding Diversity for Unpredictable Conditions

Soup and Talk 2021 – Tell the World about Your Good Food Initiative!

Marion and Benjamin are pig and dairy farmers on a community funded farm in Brittany, France. Agricultural engineers by training, they have reverse engineered the process of farming to make sure they get to take time off and make a decent living. In part 1 of a fascinating conversation, Valérie Geslin, project coordinator for Nos Campagnes en Résilience, unpacks their experiments in rural resilience. […]