After last week’s clear challenge to the SUR pesticide reform, this week the guns are blazing between MEPs and Commissioners pushing the reform. And in a familiar pattern in EU law-making, many Ministers are backing the business-as-usual block. Will we be reporting on the SUR until there are no more puns to be made? It seems that’s just what many politicians, with thier persistent pesticide proposals, want to enSURe. Ashley Parsons and Oliver Moore report. (updated 30/11/22 with snippet from Council document)

The SUR is really under attack: at the Agriculture Committee meeting of the European Parliament on the 28th of November, the European Commissioner for Health and Food Safety Stella Kyraikides addressed the Committee about the pushback on the SUR pesticide reform.

In her opening remarks, Kyraikides said, “We are in the middle of a climate and biodiversity crisis that threatens our food security long term. Meeting both challenges now requires action.” She then sought to assure representatives that the Commission is open to modifying and watering down the bill but not to kill it off completely.

But that was exactly what was on the minds of many members. When the floor opened for questions and remarks, an echo took the chamber. Italian MEP Herbert Dorfmann directly rapproached the Commissioner for not listening to the majority of the Parliament, which according to him believes the bill should not move ahead. He said the “proposal is based on a false premise: that farmers in Europe use 50% or more pesticides than they need and that they can do without them.” He then called on her to “recognize that it makes more sense to withdraw the whole thing,” and then later submit a new package that includes new ideas for R&D and new methods.

Spanish MEP Clara Aguilera had similar remarks, calling for available replacements to  be made available, a reply to Kyraikides assurance that pesticides approved for organic farming would still be accepted.

From France, MEP Gilles Lebreton said the reform is “no longer relevant,” because it “does not take into account the war in Ukraine.”

After this first round of comments, Kyraikides appealed to the Committee reminding them the problem of climate change and biodiversity crisis existed before the war in Ukraine and has only become more urgent.

MEP Anja Hazekamp from the Netherlands was one of few who got in a word of support for the reform, reiterating that the war in Ukraine is not a reason to neglect climate concerns. “How can we have a sustainable policy if we change our minds every other month?” she asked the Committee.

At the end of the meeting, Kyraikides appealed again to MEPs to consider the non-paper released last week, which offers many concessions to the reform, especially when it comes to protecting sensitive sites or populations. But in reality it seems nothing has changed since last week, and the move by MEPs to force the Agriculture Commission to make a second impact assessment seems to be holding steady.

You can watch the proceedings here

Much of this echoes what is in a draft document from the General Secretariat of the Council, dated 24th November,  “requesting the Commission to submit a study complementing the impact assessment of the proposal for a Regulation of the European Parliament and of the Council”, with a timeline of “3/6 months at the latest”.

Impact on food production; availability; price; agronomic risks; and various quantifications are requested by the Council. You can read the working document in full here: Draft Council triggering Article 241. (see snippet below of the key elements) 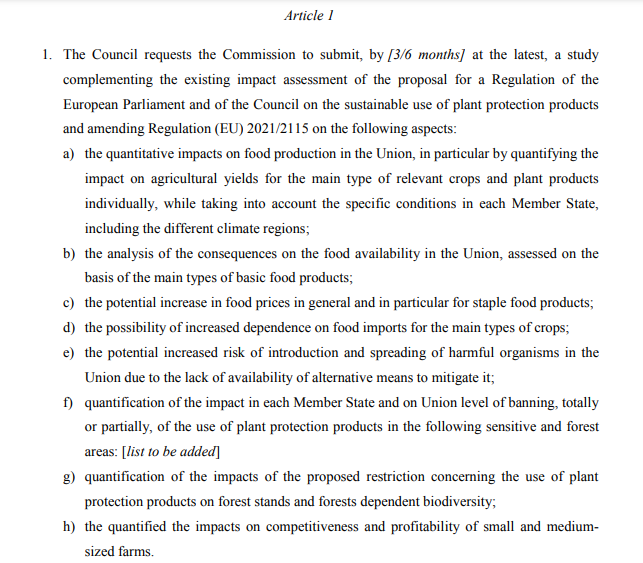 The SUR is an integral part of the Green New Deal, the Farm to Fork Strategy, and is in fact a reform on existing legislation, the SUD. Eva Corral, from the European Environmental Bureau remarked to ARC that “what opponents to the SUR proposal seem to forget in their attacks to bring it down, is that part of its content is aimed at making sure that EU current law, the SUD, is adequately applied.”  The fact that a significant number of MEPs are willing to fight tooth and nail to see it killed raises questions about the powerful pesticide lobbies in Europe (and abroad).

So how much will this impact assessment build upon current documents – and how much will be new? Already, the current situation with war in Ukraine is informing many emerging processes and documents. What role for example can the Fertilizer Communication and the Drivers of Food Security document play – which the Commission is concurrently working on?

If this is genuinely just an exercise in keeping up to date while also making progress, this process should certainly fall on the 3 months end of the 3 to 6 months spectrum – whatever about the opportunism of certain MEPs who have always opposed progress towards actual implementation of the EU Green Deal.

To try to raise the alarm and draw attention to this threat to the SUD, IFOAM Organics Europe is organising an online press conference on 6 December at 10:00 CET where scientists, farmers and the European Citizens’ Initiative “Save Bees and Farmers” will outline the current state of regarding the EU pesticide reduction.

This event will feature

After the panel discussion, journalists will receive individual information on single EU countries in breakout rooms. The language of the press conference will be English. The breakout rooms will be held in the respective national languages. You can register in advance at this link.

Winds of Change at COP27? Agri-climate news round

Glyphosate use allowed to continue in Germany

The UK government has updated its CAP implementation timeline in preparation for a 2015 roll-out. […]

According to a new policy note by ClientEarth, the EU COVID19-recovery plan is a missed opportunity to make agriculture more sustainable – ‘Instead of tying these resources to effective green conditions, the Council and European Parliament have given Member States carte blanche.’ Hans Wetzels has more. […]