By Oliver Moore and Alison Brogan.

As trilogues to decide the future of CAP progress behind closed doors, the business-as-usual lobby is fighting its corner with some level of exacerbation. They are annoyed with the Commission, with the scientific community, and with young people in the decision-making corridors. Fridays for Future and a host of civil society stakeholders want the Commission to Withdraw the CAP, and the case for doing just this is mounting, as the chasm between the European Green Deal and CAP widens.

Already, as we have reported, both the Council and Parliament have adopted very weak, unambitious positions on CAP. Both positions saw conditionality weakened, and eco-schemes weakened.

Now our sources tell us that in trilogue the German Council presidency  – already a driving force in destroying the green and fair elements to CAP, quite an achievement for such a short few months – is now also pushing for hollowing out conditionality even more than is already proposed, and for eco-schemes to basically retro-fit with what is already being done by farmers. So the aim is for no net transformative effect whatsoever, just to get a deal over the line before the European Green Deal can play a role.

.. then take their concerns seriously and ensure that the CAP aligns with the #EUGreenDeal. Otherwise #WithdrawTheCAP.. https://t.co/7ZRlOOIzE0

While the Good Food Good Farming coalition, Birdlife and a range of EU organisations and networks have called for withdrawal of this CAP (see section below this article), fresh momentum in recent weeks to withdraw the CAP has come from Europe’s youth. Fridays For Future have over 70,000 signatures and counting on their letter to Withdraw the CAP.

The Commission has not only  been listening to the youth, it has made a mild, genial critique of the Parliament and Council’s CAP positions, and how they fit (or don’t fit) the European Green Deal. 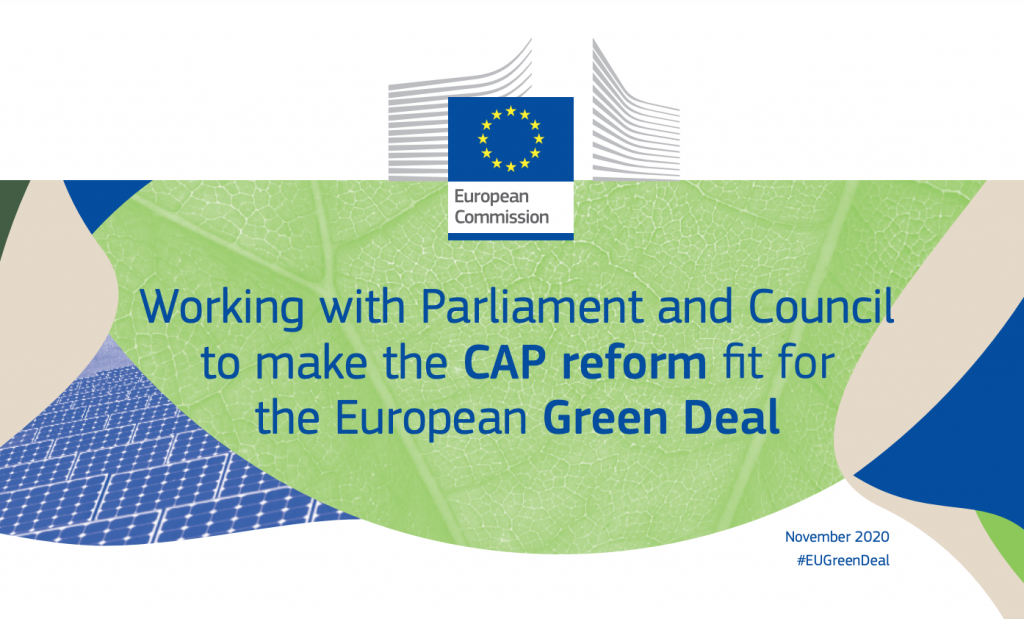 “in the Commission’s view, certain aspects of the positions of the legislator do not match with the shared objective that the new CAP delivers on the Green deal objectives.”

This is such a mild critique, in fact, it fails to negatively mark any incongruities, like a well trained modern kindergarten teacher. Instead, it prefers to reward good behaviour with a green tick while leaving bad behaviour blank. So when, for example the Commission admits that “Council and Parliament lower basic requirements, putting at risk the capacity of the CAP to tackle climate change and protect the environment as well as the CAP contribution to the European Council 30% climate expenditure target” – no biggie – we see an an empty, unmarked circle. See below for another tickle-with-a-feather-duster of an example of Commission admonishment.

Yet even this mild admonishment has annoyed the agri-business lobby, with Farm Europe claiming that the “Commission seems to attempt to re-write the history to find a new legitimacy to impose its own Green Deal objectives and align the CAP with the Farm to Fork and Biodiversity Strategies.”

The Commission’s efforts have also annoyed the biggest group in the Parliament, the centre-right EPP. Some of its leading members in the European Parliament’s Agricultural Committee penned a strongly worded letter to Commission President Ursula von der Leyen requesting “that the normal decision-making procedures be respected, that the Commission act as a collegiate body, and that individual views of Members of the College, no matter how passionately felt, do not undermine effective interinstitutional co-operation.”

“Some of the views recently expressed by Executive Vice President Timmermans call into question central elements of the European Parliament’s position on the CAP reform in terms of environmental and climate sustainability. He has now publically threatened to withdraw the Commission’s proposal
if he personally considers the level of ambition to be insufficient on these elements. Those remarks
are clearly not in line with your recent letter and with the assurances made when the new Commission
was confirmed a year ago. It is difficult to reconcile such a position with the proper functioning of the
EU’s decision-making process and it would lack democratic legitimacy.”

Since then Timmermans appears to have backtracked somewhat, with German Ag Minister Klocker stating “we are not considering any alternatives”.

Certainly it appears the Council, Parliament and main lobby are all now in cahoots.  Paulo De Castro of the S&D group in the Parliament, in yet more public  incredulity at the influence of Greta Thunberg and her young female allies, now refers to agri-business lobby Copa-Cogeca as “our point of reference”…

In my piece abt #Cap reform, I asked @paolodecastro a reply to @GretaThunberg. “With all the affection for her, cap has been around for half a century, does she know the sacrifices of farmers? Go talk to Copa-Cogeca, our point of reference”➡️https://t.co/7K9plUFGvZ #climatechange pic.twitter.com/lidEKRiv03

It is worth remembering that the Commission is part of the Trilogue, and can of course suggest amendments, and is in fact allowed to withdraw the CAP. There is a two year transitional CAP arrangement in place in case there are delays.

In reality the Commission critique is very mild. If you read the IEEP (2020) Preliminary assessment of AGRIFISH Council and European Parliament’s positions  you will see a much stronger stronger critique which finds that both the European Council and the European Parliament’s positions on the post-2020 CAP undermine four out of the six essential elements that are “needed for keeping the next CAP’s environmental ambition alive”.  Further, the other two essential elements “do not contain sufficient safeguards to firmly preserve or build on the environmental and climate proposals put forward by the Commission”.

Business-as-usual is struggling to find scientific voices to somehow back the unbackable. The AGRI Committee in the Parliament itself requested a study of CAP and European Green Deal synergies.

According to that study, conducted by INRAE (INRAE, French National Institute for Agriculture, Food and Environment) and AgroParisTech, the key findings include:

• EU agriculture and food practices are currently not on the right track to meet the Green Deal ambition, objectives and quantitative targets related to climate, environment, nutrition and health issues in that sector.

• To reverse these unfavourable trends, there is an urgent need to significantly strengthen many technical provisions of the CAP; in particular those related to conditionality requirements and eco-scheme measures, and those to improve the CAP governance, notably by making the attainment of targets legally binding and improving their enforcement, reporting and monitoring.

So what happened when the AGRI Committee was presented with these findings recently? Why those who drove the Parliament’s Position in Plenary – Lins, Dorfmann and De Castro –  questioned its scientific nature.

Have a look at a recording in full

Herbert Dorfmann EPP (17.48:55-17:49:11): “Let me say quite honestly when I look at the summary, when I read it for the first time, I got the feeling that we were talking about a basic programme in a political party rather than a scientific study.”

Dorfmann goes on to claim that CAP has no role in impacting on the balance between, for example,  meat-based and vegetarian diets, despite the obvious fact that area based direct payments, as income support – most of what actually happens in CAP – are stacked towards livestock farmers, with horticulture receiving little due to its smaller area footprint.

And before we begin to sound like cheerleaders for the Commission, the INRAE researchers found that the Commissions’ 2018 CAP proposal was barely able to actually deal with the climate and biodiversity crises we face, a position echoed by the European Court of Auditors in 2018; it is also the case that the Agriculture Commissioner Janusz Wojciechowski recently  proposed precision farming as a flagship eco-schemes, against his own rules, as we revealed some weeks back (see immediately below).  Even within the Commission then, there are nuances.

It Gets Worse – Time for CAP, Interrupted

Meanwhile as we also report today via Pesticide Action Network Europe, almost all Member States are not interested in implementing Farm to Fork’s pesticide reduction targets, while the pesticides approvals process itself is under severe criticism. And see below for what the European Court of Auditors have found  – time and time again – as the abject failure of CAP to address so many basic environmental needs.

What sort of signal is being to the rest of Europe sent when the UK countries – messing up so comprehensively on so many aspects of Brexit and Covid-19 responses-  are doing the supposedly unthinkable in farming and food? England and Wales have proposed to drop direct payments, and to stop live exports – while CAP even still supports bullfighting. The Parliament voted for one and against another amendment on bullfighting in adopting its Plenary position, so some CAP support may even continue for this practice.

After all, the tradition is for still further environmental evisceration in trilogue, based on previous CAP ‘reforms’.

Is it any wonder young people are becoming more radical and calling for the withdrawal of this CAP? Their futures are being stolen from them. While ernest sounding spin on environmental ambition is verbalised ad nauseum by ministers and MEPs, and reports as if its in any way real or relevant, legislation barrels on ahead, being co-constructed to ramp up irreversible climate breakdown, biodiversity collapse and broader social ecological destruction beyond planetary boundaries. We cannot lock our collectives selves into this appealing CAP trap, with its quicksand for soil, its snaring of society, for years to come. We must withdraw this CAP.

Council and Parliament on CAP

European Court of Auditors on CAP

CAP | Time for Commission to Get Real on Spending, Say Auditors

40 scientific experts have come together today to release a paper on the role CAP plays in trying to make farming sustainable. Below we republish the summary of this paper, and provide a link to download the paper in full. Led by Guy Pe’er, and including our own Matteo Metta, the paper is critical of both the initial CAP proposal by the Commission from 2018, and more critical again of the positions taken by the Council and Parliament in October 2020. Important reading in the current trilogue context. […]